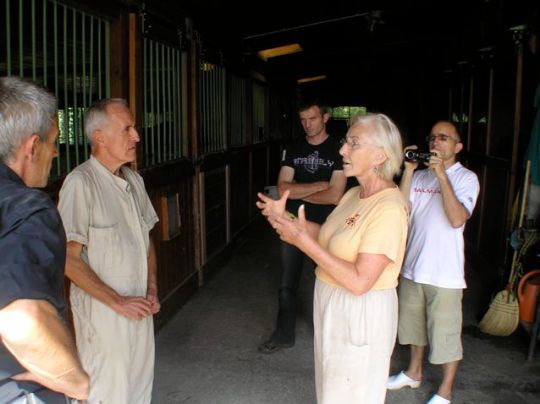 Dr. Krusic and i discussing the problems of a Standardbred mare

When I walked in the stall she was standing in an odd posture that I have never seen in more than 50 years of observing countless thousands of horses.

Her left front leg was standing at an angle of at least 20 degrees to the side of her shoulder, and her right hind leg was directly in front of her left hind leg. What came to me intuitively was a problem with proprioception. Proprioception is the sense of the relative position of neighbouring parts of the body. It is a third distinct sensory modality that provides feedback solely on the status of the body internally. It is the sense that indicates whether the body is moving with required effort, as well as where the various parts of the body are located in relation to each other.

This mare could never be trained to harness, which would not be so surprising given her lack of awareness that must have made her feel very unsafe. I asked if her hyoid bone had been checked for damage and when Dr. Krusic checked, it did indeed feel abnormal. It was my feeling that the kindest move would be to send the mare to horse heaven because Dr. Krusic had explored all avenues possible and it would not have been kind to pass her along where she could easily have been abused because of her resistance and lack of awareness.

Many horse people I know are not aware of the importance of the hyoid bone. Robert Oglesby, DVM wrote in a report called Temporohyoid Osteoarthropathy and Hyoid Disease in Horses the following:

The hyoid is part of the skull and it is made up of lots of long smaller bones that are joined end to end with each end of the apparatus connecting to the skull. The stylohyoid is the largest bone of the rather complicated hyoid. It forms a bony frame work that helps support the tongue, the larynx, and the pharynx. Diseases of the hyoid apparatus, referred to as temporohyoid osteoarthropathy, can result in neurologic deficits of the cranial nerves of horses. Depending on the location of the disease and the nerves affected clinical signs vary form horse to horse. Horses have been presented with complaints of head shaking, incoordination (ataxia), head tilt, facial muscle paralysis, ear infections, and corneal ulceration.

Apparently there are many cases where the hyoid bone may be dislocated and can be corrected, but in this case, when her problem of balance had existed over years, improvement did not seem so likely, and the owner had already given up after having the mare sterilized, thinking that hormones were the cause of her resistance.