Animal Emotion: It’s for the Birds!

At a recent weeklong TTouch for Horses training, I made the observation that one of the horses there seemed very grateful to be with his person but felt “he was only a horse,” so could not feel such emotions. Fortunately, there are many people who are awakening to the realization that horses (and all animals)  do feel emotions and, thanks to the internet, we are seeing truly remarkable examples of animal emotions and interspecies connections.

Kathy Wells, who graduated from the 3-year TTouch Companion Animal Certification Training in New Jersey on May 21st, sent the following stories of 2 birds – a Goldfinch and a Swallow – who lost their mates. The stories were emailed to her from her friend Nancy and its my pleasure to pass them along to you.

An incredible thing happened to me the other day, compounded by another incredible thing! As I was driving down the road, I witnessed the most incredible thing I had ever seen in nature: minutes before I reached it, a female Goldfinch had just gotten hit by a car. Right before my very eyes I witnessed a male Goldfinch going back to her, apparently trying to help her get up. I drove around them carefully and then turned my car around and headed back to see if I could help them, but by the time I got back and parked my car it was too late … she had died, and the oncoming traffic had scared off the male bird. What a sad, yet incredible event to witness. I felt truly blessed to have seen such a thing take place. Then later that day, when I checked my email … I received the following email with another incredible tale, very strange indeed … I just felt compelled to share this story with all of you.

There is more love among animals than the average person who has no pets can even imagine.

The female swallow has been fatally injured. 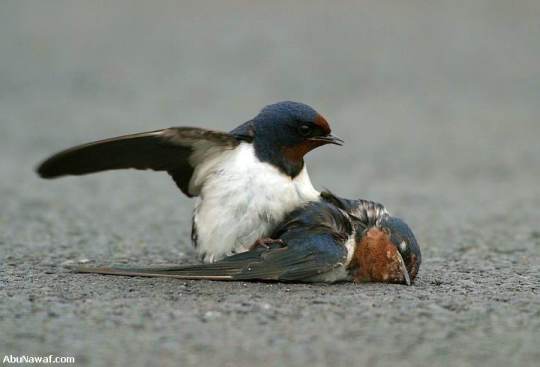 [/caption
]He tries to move her … a rarely-seen effort for swallows!

Apparently aware that his sweetheart is dead and will never come back to him again, the male appears to cry

He brings her food again but finds her dead 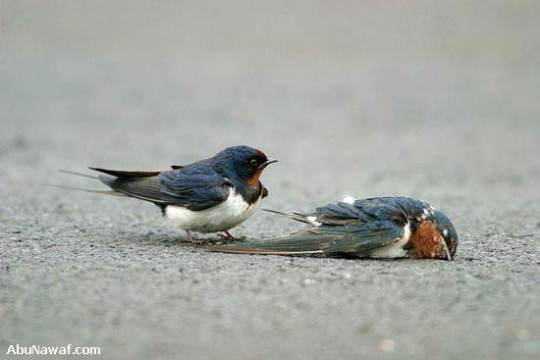 At last aware that she would never return to him, he stood beside her in sorrow

Millions of people in America, Europe and India cried after viewing these photographs. The day these photos were published in France, the newspaper that carried the story sold out. Yet many people believe animals lack intelligence and emotion.