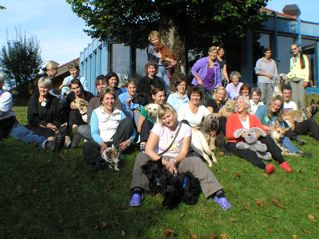 Members of the 3rd TTouch for Companion Animal Certification Switzerland. The training is taught in German and translated to French, English and sometimes Italian.

The Swiss TTouch for Companion Animal Certification trainings are organized by Teresa Coterelli-Gunter and Leisa Leicht. As usual, this year they attracted a marvelous group of 20 students with 18 dogs from Switzerland, Germany, Italy, France and Slovenia. Edie Jane Eaton, our brilliant TTouch Instructor from Quebec, Canada arrived from teaching a certification training in Prado, Italy, to take over the final four days of the training after Roland and I headed south to Germany. The Resort Hotel venue in Mogelsberg is picture postcard Switzerland – a small village built on many levels with steep green, tree covered-hills and pastures full of lovely Swiss brown cows with tinkling bells.

Teresa and Lisa also organized an Advanced Training for two days before the Companion Animal training began- with the first day being TTouch for You and the second day dedicated to our doggie friends.

Saturday night after the training there was a meeting of the Swiss Guild with 18 members in attendance. A party followed in a big log house just up the mountain from the hotel. We had 42 practitioners gathered to celebrate my honorary PhD and to witness the upgrades from Practitioner 2 to TTouch Practitioner 3 for Companion Animals – Teresa Cottorelli-Gunter, Lisa Leicht, Sylvia Sawitzki, Maya Conochi. Lisa Burgin also received her TTouch Practitioner 3 but could not be in attendance to accept it. Teresa Cottorelli did her first training with Christa Meuller in 1995, and the other four attended their first certification training in 1996.

It was a special pleasure to have Christa Mueller and her mom, Holly, with us that evening. Holly Mueller shared two stories of TTouch experiences she had on planes when a passenger collapsed with low blood pressure and she revived and calmed them with Ear TTouches. Christa was one of the first organizers of the TTEAM trainings for horses in the 1990’s and is looking forward to being more deeply involved with the active TTouch Guilde in Switzerland . She has kept very busy teaching Centered Riding for the past decade, and is certified as one of the few Level 4 Instructors for Centered Riding in Europe. Christa brought her two of her gorgeous Royal Poodles for the Dog Day. Royal Poodles are rare. they are brown and white and look like they just stepped out of a painting from the Middle Ages. Christa breeds them and has 18 at home at the moment.

Our dinner that night was prepared and provided by Marie-Jeanne Dufour, and her sister-in-law Edith and brother Dominic. Marie-Jeanne and Edith are both graduates of the German TTouch For You certification Program for people. Marie-Jeanne is also a Feldenkrais Practitioner and a member of the Swiss Animal Rescue team and Edith is currently enrolled in the Swiss Feldenkrais training program. The three of them prepared a traditional mountain meal of melted Raqlette cheese, small boiled potatoes, sour pickels and tiny pickled onions, and salad. Teresa asked all 42 guests to cut a little fruit for the fruit salad so it was a family style preparation! Delicious cakes and wine topped off the evening feast.

Since Teresa had organized this dinner as a surprise for me in honor of my honorary PhD I took this opportunity to thank the people who been responsible for the inspiration that has guided me over all these years to develop this special form interspecies communication that we access with TTouch – Milestones along the trail – many of them synchronistic events that I learned to trust as I practiced listening for inner guidance.

First was my grandfather, Will Caywood, who learned a form of equine massage from Russian Gypsies. He attributed his success that gained him the title of “Leading Trainer” at the Moscow Hippodrome (Russia) in 1905 (with 87 winners) to two factors; first, that every horse is his stable was “rubbed” with short stokes over every inch of the body 30 minutes a day by a groom, and second, he said he did not enter a horse in a race unless “it told him it was feeling fit enough to win!!!”. Can interspecies communication be inherited?

1956 to 1971: My first husband, Wentworth Tellington was 20 years older than I and graduated from the last cavalry class for officers at Norwich University the year I was born. It was thanks to Went that we wrote “Massage and Physical Therapy for the Athletic Horse” in 1965, based on my grandfather’s equine massage technique. That booklet was incorporated as a section in our book, “Endurance and Competitive Trail Riding”, published by Doubleday Publishing House in 1979. Thanks to Went we both taught at Chadwich School in Rolling Hills, California (a private prep school) from 1957 to 1961. That is where I met my now husband, Roland Kleger. I taught Roland to ride when he was 17 and a student at Chadwich.
Thanks to the genius of Went Tellington we founded and directed the Pacific Coast Research Farm and School of Horsemanship at Badger, California – a ten month residential school for riding instructors which we ran together from 1964 to 1971. In those years we had students from nine countries and 36 states.

1968: for my birthday I was given an astrological reading by the famous Fritzie Armstrong. This reading was said to be one of the first computer-generated astrological charts. The reading was another life-shifting milestone. She predicted that I would develop a form of communication that would spread around the world. And she wrote that in order to develop such a method I would have to learn to trust my intuition. I began to look for ways to develop my intuition but I didn’t seem to make much progress until another synchronistic had a life-shaping influence.

1972: It was in this year I made my first of dozens of trips to Esalen Institute,  situated on the cliffs of the Big Sur coast in California, south of Carmel where I headquartered in the 1980’s, although I was mostly teaching in Europe. Esalen is world–renowned as a center for personal growth. I have spent many weeks there both attending courses and teaching TTouch workshops and communing with nature while de-stressing in the vegetable garden high above the pounding surf. During a week-long Robert Monroe “Out-of-the-body” workshop I was one of 40 participants in a study conducted by Russel Targ of Stanford University Research Institute. It was a psych test to determine the use of left and right brain – logic and intuition. Much to my surprise I was informed by Russel Targ that my test showed I had as close to a 50/50 use of both logical and intuitive brain waves from all the subjects he had measured. That is when I began to search for books that described ways to better understand the intuitive–right brain function.

1974: By then I knew I had to follow my inner guidance – my intuitive knowing. I knew I had to shut down my school and leave the horse business. There was so little understanding and so much dominance I felt I needed to work in some other way with animals. I’m sure many people who knew me thought I had lost my mind. After Went and I went our separate ways (with mutual agreement and without blame I am happy to say) I continued to run our international riding school but it was just too much to do alone. My friend and mentor, Hungarian Countess Margrit Bessenyey, who had kept a dozen or so horses in training with us at the research farm since 1964, suggested I reduce the stress in my life and find a property closer to San Francisco which she would buy and I would run. I had a beautiful home and stable and an ideal financial situation as manager of the Hungarian Horse Farm and six-month School of Horsemanship for Riding Instructors.
1974: University of California at Santa Cruz: I had been teaching evening adult education classes in horse management with Dr. Kerry Ridgeway

1973 Ursula Bruns visit
Third was Dr. Moshe Feldenkrais. To have had the honor of spending the four summers with him personally in the Feldenkrais Professional Training Program at the Humanistic Psychology Institute in San Francisco in was life-changing. His brilliance at developing human potential

Lily Merklin came back a day early from her vacation in Maiorca and drove five hours to be present at the gathering, arriving just in time to accept her certificate for Tellington TTouch Instructor for Horses. In addition to teaching countless TTEAM trainings she has been writing articles about TTEAM in Pegasus Magazine and others for many years. Lily lives in Germany and is the ninth Tellington TTouch Instructor for Horses worldwide.

From My Inbox: the Power of Intention